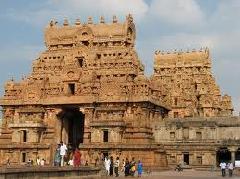 Famous for: Ancient temple with wonderful architecture and gigantic mahalingam

Also known as the Big Temple, Brihadeeswara Templeis the most popular religious attraction in Thanjavur. Built by Rajaraja Chola I in the 11th century, the temple is exquisitely const... 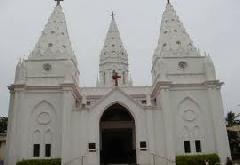 Famous for: An ancient church built in white marble

Located in the Thanjavur Palace garden, Schwartz Churchis beautiful church that was built by the Chola king Raja Seofji in 1779. It is a prime attraction of the city built in white marble. This ... 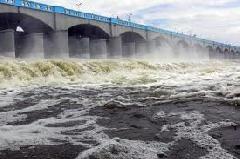 Famous for: The oldest dam and heritage site

Grand Anicutis one of the renowned attraction for the tourists in Thanjavur and is located near Trichy. Also known as the Kallanai, the Grand Anicut is a heritage site of the state of Tamilnadu.... 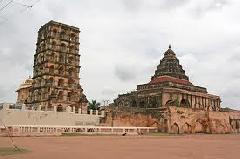 Famous for: A historical attraction

Located near the Brahadeeswara Temple, the Vijaynagar Fort is a popular historical attraction to be seen in Thanjavur. It was built by Nayak ruler Vijay Raghav in 1550 AD and later on completed ...

Famous for: A beautiful garden and picnic spot

Siva Ganga Garden is a beautiful garden located inside the premises of the Vijaynagar Fort in Thanjavur. Built by Sevappa Nayak in the 16th century, the garden is adorned with variety... 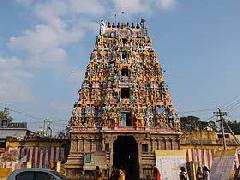 Famous for: An ancient temple dedicated to Lord Brahspati

Dedicated to Lord Guru Bhagwan or Lord Brahaspati, the Alangudi Temple is a popular attraction in the ancient town of Thanjavur. The mythological legends say that Lord Shiva consumed the deadly ... 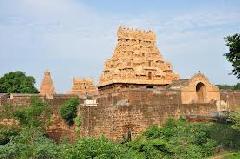 VellaiPuliar Temple is an important ancient temples to be visited in Thanjavur and is dedicated to Lord Ganesha. The temple is mainly known for its wonderful carvings and sculptural works done o... Famous for: A pilgrimage destination where the wedding festival of Lord Shiva and Parvati is performed

Located near a small town of Kuthala in the district of Thanjavur, Thirumananjeri Templeis a famous pilgrimage destination. It is believed that the wedding of Lord Shiva and Parvati took place a... 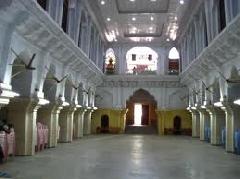 Famous for: A palace for music lovers

Also known as the Hall of Music, SangeethaMahalis located in the Thanjavur Palace and is a prime attraction for the music lovers. It was built in the early 1600’s by King Sevappa Nayak and...