Culture of Dadra And Nagar Haveli 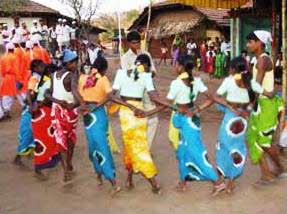 People of Dadra and Nagar Haveli mostly commonly speak the Marathi, Gujarati and Bhili. Bhili is one of the most frequently used local languages by the local people. One could see very rare use of Hindi language also.

Though all the religions are equally treated in the region but then also Hindus people carries majority. People following Christianity and Islam could also be witnessed in Dadra and Nagar Haveli.

Among the local festivals, people of union territory celebrates almost all major festivals of India like Navratri, Pateti, Ganesh Chaturthi, Id, Diwali, Akhateej, Monsoon Magic festival, Tarpa festival,etc. if we talk of art of Dadra and Nagar Haveli, then the most famous ones are leather slippers, baskets of bamboos and weaving mats. Music of the place is quite melodious and the music instruments are usually made by the local people making use of gourd, bamboo, clay, etc.