The beautiful city called Mumbai is characterized by long standing hills on one side and free flowing sea on the other. The city has been known by several names from time to time, and formerly it used to be known as Bombay. Mumbai is often recognized as the most populous city in the world. Mumbai is the capital of India’s state Maharashtra and is also well-known as the commercial capital of India.

The city is the conglomeration of seven islands and so it is also known as Island City. These seven islands were once at the Konkan coastline and gradually in the due course of time, they joined together to form an island called Bombay. Mumbai is also one of India’s main port cities, generating around 70% of maritime trade. Mumbai has several beaches like Juhu Beach and Barsowa Beach which are hotspots for both tourists and visitors alike.

Mumbai is the city where life starts at night and the festivities continue till the wee hours. Party, fun, fashion, entertainment are the keywords which describe the liveliness of the place. The city is flourishing incessantly and has become one of the busiest metropolitan cities in the world.

The city has also flourished a lot in terms of trade and commerce and is a major business hub in India.  Today, all the top-notch companies and major financial institutions have made Mumbai as their headquarters. This fashionable city has lots to share and talk about. The aesthetic beauty of the city is like a story which one can come across its history, culture and a large number of attractions which have been attracting travelers from across the globe every year. 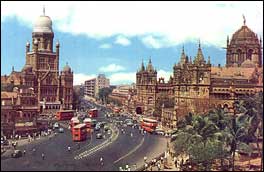 15 Places to Visit in Mumbai