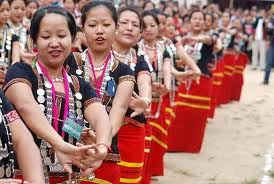 The people of Itanagar are like the time-honored Papum Pare District people. The tribes Nyishis, Adis, Galos, Apatanis and Miri people lived in Itanagar. Still some tribal people are in Itanagar and also living in various nooks and corner of Arunachal Pradesh. Itanagar and its neighboring areas are mainly populated by people of the Nyishi tribe.

The religions in Itanagar are obviously are those that are practiced by various tribes who reside here. The major religions of Itanagar are Donyi Polism, Buddhism, Hinduism and Christianity. Itanagar is one of the bilingually affluent and most miscellaneous regions of all regions of Asia. There are at most fifty languages in which thirty languages are popularly utilized by the people for communication. In which Tani language is primarily spoken by the peoples of Itanagar.

Local Festival and Art and Music

Festivals are traditional aspects of Itanagar.  Festivals are the exemplification of the Itanagar people’s culture. They celebrate various festivals in which all people take pleasure to participate. Many festivals are celebrated throughout the year by any of the tribes and so Itanagar is also called as the “Land of Festivals “.

Itanagar encompasses a mix of various assortments of Nyishi tribe and so various varieties of foods are provided in various restaurants. Non-vegetarian dishes are very popular and time-honored of Itanagar cookery. Momos and Thukpas are the famous and traditional dishes of the Nyishi tribe.