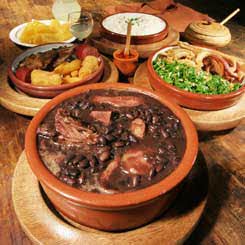 Brazil cuisine is as varied as its topography and mores. Their staple dish is “feijoada”, a vigorous poaches made of black beans and pork is flavorsome experience. While you are in Brazil, try the caipirinha, Brazil´s signature drink made of lodged limes, sugar and cachaça.  Coconut Water is possibly the best fresh drink for summer and is available abundantly. Beer is a popular drink in Brazil. Inexpensive chows can be seen on the streets dotted around the Rodoviaria in tiny self service canteens.  Going back to history, until the Portuguese invaders marched in Brazil in 1500, Brazil was occupied by Indian ethnic groups. The Indians’ main food was manioc (cassava). Its flour – farinha de mandioca – still remains fundamental to the Brazilian diet, portraying everywhere as a flavoring, either cooked to a creamy sauce called pirão, or grilled and fried in oil as farofa, to sprinkle on the dishes.