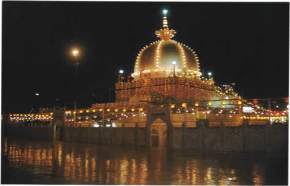 
Ajmer of Rajasthan!! One of the sacred cities of Rajasthan that sets perfect example of unity of the country as it is the religious place of both Hindus and Muslims.It is so because it houses one religious place of Hindus named Pushkar and that of Muslims, it is Dargah of Sufi Saint Khwaja Moinuddin Chisti. Formerly, the city was addressed a...